Every year, UVU (my school) hosts what’s called The Clothesline Project.  It’s a project that is designed to raise awareness about domestic abuse of all kinds — physical, emotional, sexual, and also things leading to death and suicide.

The layout is that survivors of abuse create t-shirts where they tell their story or share a message about what happened or what they went through.  In some cases, the t-shirts are written by relatives of people who were abused and were killed.  It’s pretty intense stuff. 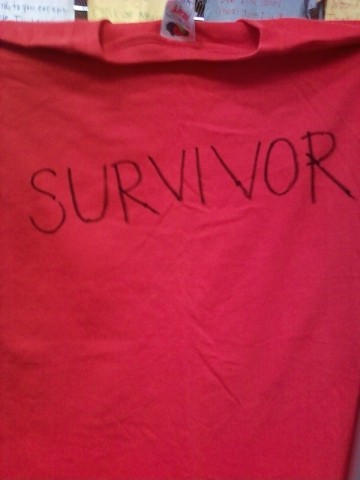 I went last to last year’s exhibit, and went again this year for my psychology class.  The first time I went, I looked at almost every t-shirt there, and I was at the exhibit for probably an hour and a half.  On multiple occasions I was so grossed out that I almost threw up.  A lot of them were terribly traumatizing.  I remember driving home afterwards, and I was so overcome by emotion that I was sobbing uncontrollably.  Afterwards, I was deeply depressed for about a week.  It certainly raised some awareness in me.

I learn a lot from reading first-hand accounts of anything related to situations like this.  It gives a clear, non-academic approach of what it feels like for someone to go through these things.  The stories are informative, to see how they cope, how they escape, how some of them let go, and so on.  There are all kinds of endings as well.  Sometimes their family or friends don’t believe them, sometimes the perpetrator dies or gets thrown in jail and is convicted.  Other times they get a divorce, or get married to someone else, or just flee the situation completely.

A common problem that I see in a lot of the stories are this — people do not speak up when they are being abused, or do nothing about it.  In some cases, someone else in their family was also being abused, but neither one knew.  It is so important to speak up, to tell someone!  Abuse has many side effects on the person receiving it.  It severely mess up their emotions and take away from them a proper healthy reference of how things like relationships, sex, and emotions are supposed to be.  The best comment comes from one of the shirts below: “Silence is your enemy.  Talking is your medicine.”

I took some snapshots with my phone this year, because I wanted to post some of the stories on here.  I only managed to get a few, because I showed up at the display when there was only about twenty minutes before closing.  On top of that, I opted to only take pictures of shirts that I thought I’d be able to read later from a photo.

I’m posting the pictures and the text some of the t-shirts on here.  Be warned that these are graphic, verbose, and terrifying.  Proceed with caution. 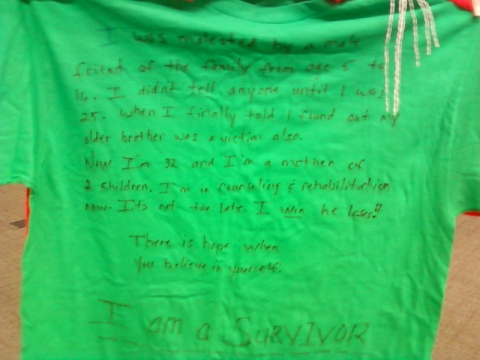 I was molested by a male friend of the family from age 5 to 16.  I didn’t tell anyone until I was 25.  When I finally told, I found out my brother was a victim also.  Now I’m 32 and I’m a mother of 2 children.  I am in counseling and rehabilitation now.  It’s not too late.  I win, he loses!

There is hope when you believe in yourself.

I am a  SURVIVOR. 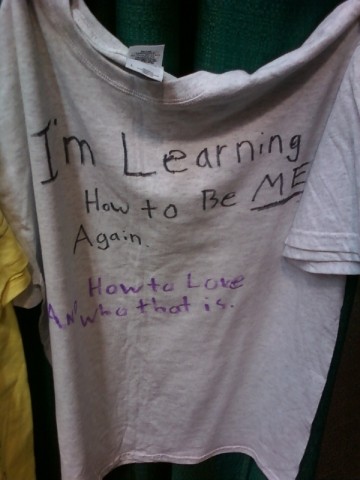 I’m learning how to be ME again.  How to love and who that is. 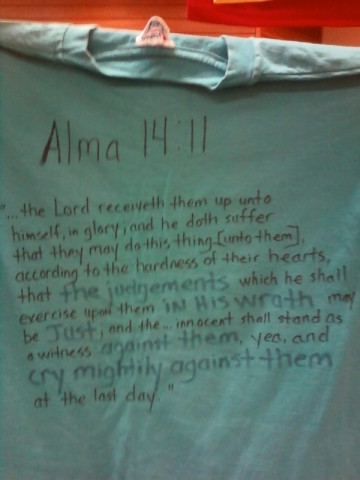 Alma 14:11 “… the Lord receiveth them up unto himself, in glory; and he doth suffer that they may do this thing [unto them], according to the hardness of their hearts, that the judgements which he shall exercise upon them in His wrath may be just; and the … innocent shall stand as a witness against them, yea and cry mightily against them at the last day.” 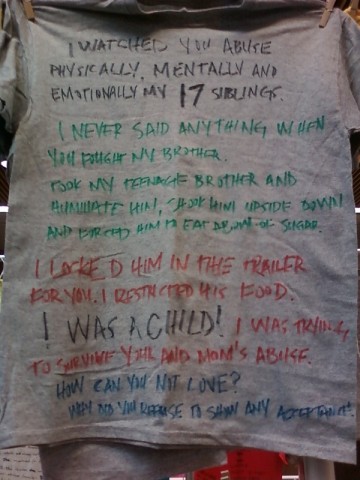 I watched you abuse physically, mentally and emotionally my 17 siblings.

I never said anything when you fought my brother, took my teenager brother and humiliate him, hook him upside down and forced him to eat a bowl of sugar.

I locked him in the trailer for you.  I restricted his food.

I WAS A CHILD!  I was trying to survive you and mom’s abuse

How can you not love?  Why do you refuse to show any acceptance? 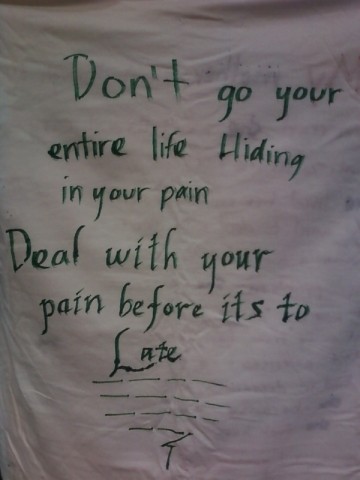 Don’t go your entire life hiding in your pain.  Deal with your pain before its to late. 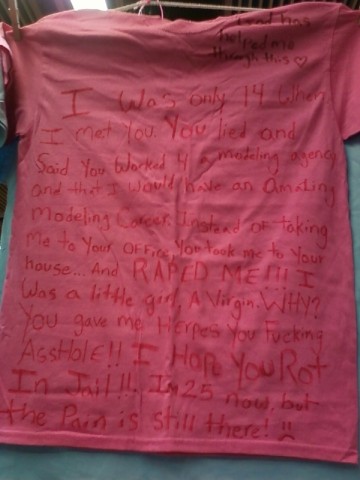 I was only 14 when I met you.  You lied and said you worked 4 a modeling agency and that I would have an amazing modeling career.  Instead of taking me to your office, you took me to your house … and RAPED ME!!!  I was a little girl, a virgin. WHY? You gave me herpes, you fucking asshole!  I hope you rot in jail!!  I’m 25 now, but the pain is still there! =( 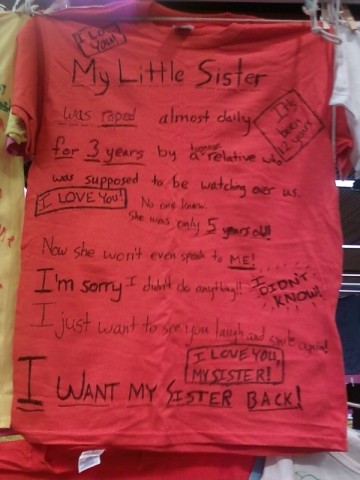 My little sister was raped almost daily for 3 years by a abusive relative who was supposed to be watching over us.  No one knew.  She was only 5 years old!

Now she won’t even speak to ME!

I just want to see you laugh and smile again!

I WANT MY SISTER BACK! 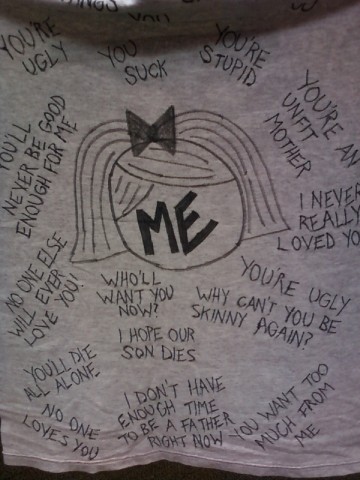 You’re ugly.  You suck.  You’re stupid.  You’re an unfit mother.  You’ll never be good enough for me.  No one else will ever love you!  Who’ll want you now?  I never really loved you.  You’re ugly.  Why can’t you be skinny again?  You’ll die all alone.  No one loves you.  I don’t have enough time to be a father right now.  You want to much from me. 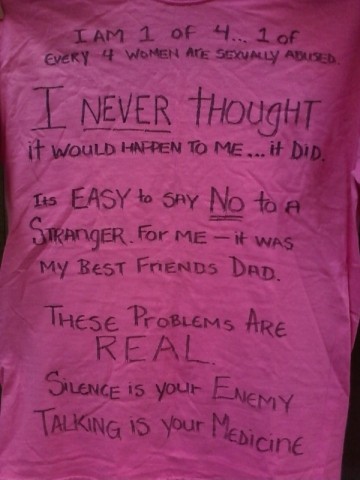 I never thought it would happen to me … but it did.

It’s easy to say NO to a stranger.  For me — it was my best friends dad.

These problems are REAL.  Silence is your enemy.  Talking is your medicine. 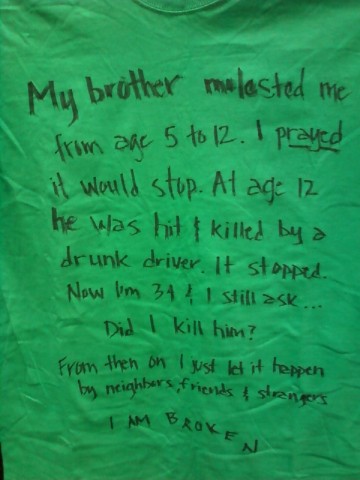 From then on, I just let it happen by neighbors, friends & strangers. 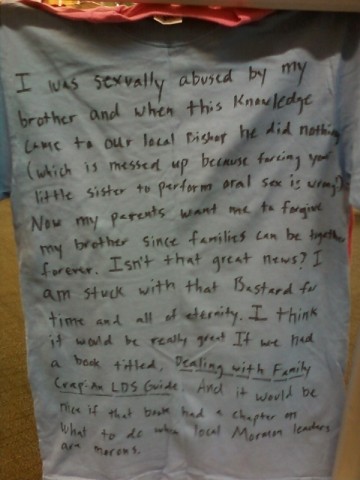 I was sexually abused by my brother and when this knowledge came to our local bishop.  He did nothing (which is messed up because forcing your little sister to perform oral sex is wrong).

Now my parents want me to forgive my brother because families can be together forever.  Isn’t that great news?  I am stuck with that bastard for time and all of eternity.

I think it would be really great if we had a book titled Dealing with Family Crap – an LDS Guide.  And it would be nice if that book had a chapter on what to do when local Mormon leaders are morons. 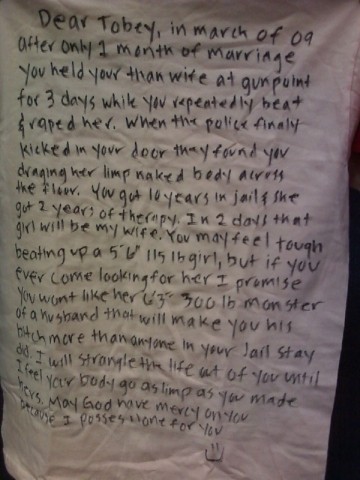 Dear Toby, in March of 09 after only 1 month of marriage you held your than wife at gunpoint for 3 days while you repeatedly beat & raped her.  When the police finally kicked in your door they found you draging her limp naked body across the floor.  You got 10 years in jail and she got 2 years of therapy. In 2 days that girl will be my wife.  You may feel tough beating up a 5′ 6″ 115 lb girl, but if you ever come looking for her I promise you wont like her 6′ 3″ 300 lb monster of a husband that will make you his bitch more than anyone in your jail stay did.  I will strangle the life out of you until I feel your body go as limp as you made hers.  May God have mercy on you because I posses none for you =)