I’ve finally found a way to rip some of my Blu-Ray discs, kinda.  I’ve had to manage a few workarounds because I’m missing a pretty common piece of hardware in the setup: a BD-ROM drive.  I do have a PS3, though, that I’m running Linux on, and I can get to the media just fine that way.  I also have to use shareware, both on Windows and Linux … but, it works, and the files look great. 🙂

So, the backstory is that the other day I was making a note of all the projects I have to do,  creating what I call my project tree.  It’s basically an ordered list of general projects (Gentoo, home theater system, etc.), and then abstract projects underneath that.  It’s nice because I can get a birds eye view of all the stuff I’m working on without going into specifics about any of them.  One of the home theater ones was to get at least ISO disc rips of the Blu-Ray movies I already have, even if I can’t decrypt them yet, so I can at least play around with my options as they become available.

Well, I had moved my server setup around not too long ago, so I had two 750 GB harddrives just collecting dust.  I put one of them in an external USB drive, and plugged it into my PS3, which was already running Linux (see this pervious post for all the fun details).

I formatted my external USB drive as NTFS, so that I could read/write to it with Windows as well, and then I would insert a disc and just dump it to an ISO file.  That’s easy enough:

I grabbed a couple of them (which took awhile, don’t let me kid you on that part) so that I could get a good sampling in case I had more luck with one than another.

Once that was done, I trotted the little drive and plugged it into my netbook, running Windows XP, and installed both Virtual CloneDrive and AnyDVDHD.  The first one lets me mount an ISO as an actual disc drive, and the second actually decrypts the disc for me and dumps the contents back to the harddrive.  So, that’s two passes now on all the data, which is making this take a long time.  But that’s okay, it’s fun. 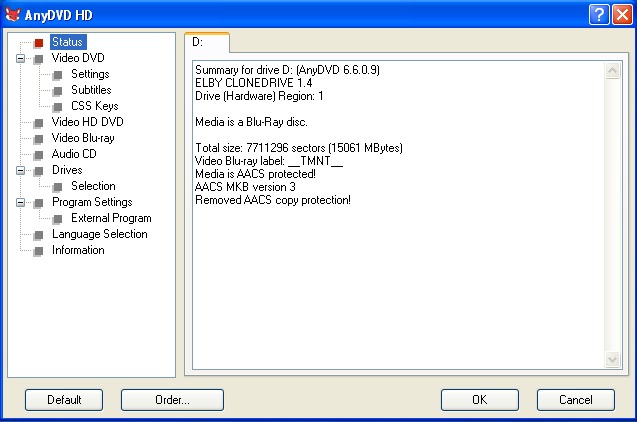 Now that I have the actual contents, the MPEG2 transport streams, I can play it back with MPlayer, ffplay or whatever.  I’m having limited success with latest MPlayer on the files with VDPAU playback support, but it could just be my video card (GeForce 8600 GTS).  On my HTPC frontend, it works almost perfectly on there, with a nicer video card (GeForce 9300).  My desktop just craps out, though.  I can still watch it with Xv video out, though.

mkvtoolnix doesn’t support m2ts files right now, so I don’t have many options if I wanna change things around.  I’m still in a proof-of-concept stage, so I don’t really care all that much.  Plus, my options are already limited.  AnyDVDHD is shareware that will expire in 21 days, and while it’s amazing and works great, it’s really expensive — something like $200 for a lifetime license.  Eek.  With that, I’ll keep trying my options on Linux.

The second piece of shareware I ran into (which also has a limited evaluation license, though this time for 30 days) is MakeMKV.  The Linux port is always a little more difficult to find, so here’s a direct link to the details on the lastest version.  Boy, I never thought I’d be talking about shareware on my blog.

MakeMKV works really nice, too.  It’s supposed to be able to do the same job as AnyDVDHD, I believe, but since I don’t have the actual Blu-Ray drive, everything I’ve tried has never worked when just mounting the ISO direcly and trying to access that.  I believe that part of cracking the key involves having access to the drive.  I’m really not sure.  I’ve read a bit about the whole process, but it’s still really confusing to me still.

Anyway, the software will let you access it directly through the decrypted contents, and that’s what I did.  The interface is actually really simple and nice, and I would actually consider buying this one (it’s much cheaper, at $50 for a lifetime license).  I’m trying to remember the last time I paid for a software license.  One that comes to mind, is that I actually have a valid registration key for Legend of the Red Dragon, the really old BBS door game.  Wow.  I think it cost me something like $15.

MakeMKV is pretty nice, though.  It snags the subtitles I select, and already includes the chapters as well as the HD audio formats.

So, that’s it.  The whole process is pretty tedious, but it works, and I’m happy.  I don’t really care about decrypting it too much right now, since I don’t wanna go through the pain of trying to play them back over my HTPC just yet.  I’d need to do a lot of tweaks and upgrades to my system, and I really don’t care that much.  It’s not worth the hassle.  Especially, uh, since I just bought a new Blu-Ray player last month. 😀

Really, though, I’m just doing this for the exercise since when I get bored, often times I’ll want to play around with media files and formats and see what I can do with them.

Eventually I’ll buy a BD-ROM drive and see what I can do, but for now I’m trying to save some $$$ and the whole point of this was to see if I could rip some discs with just the hardware available, and I could. 🙂  Woots.

On a sidenote, I posted aacskeys to the portage tree today, which is one of the tools users need to decrypt the keys on their discs.  Hopefully we can get some more hackers interested in poking at it.  That’s always good.

Last but not least, here’s an actual screenshot from the final rip. 🙂

I love TMNT. 😀  Boy that’s a post for another day … which reminds me, I should get a copy of my home-made videos some day, that I made with my action figures.  Oh man, that’d be awesome.

7 comments on “ripping blu-ray discs on linux … and windows, and ps3”